A screenplay has been registered on the life of Bessie Coleman

A story about the life of the first African-American female to fly an airplane. Bessie Coleman fights through racism and gender bias in the 1920s to eventually triumph in the new aviation field as a barnstormer and stunt pilot. 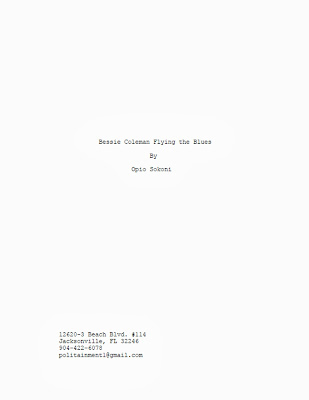 The major newspapers in the 1920s had a fascination with aviation. The first black female to fly an airplane, however, was made a household name among African Americans by the black press. They both covered her. Bessie Coleman was called “a vivacious little cutie” in one major newspaper and a “nervy lady” by The Chicago Defender, a black weekly. Bessie’s antagonist is a storm of circumstances that includes her being female, black and economically poor in the exciting times of the roaring twenties. Blues songs and swing-Jazz dances created excitement everywhere. Bessie’s best friend and confidant, Ethel, becomes one of the most celebrated Blues, Gospel and Jazz singers of the day.

We see a thoughtful and intelligent child grow up and leave the harsh realities of a small southern town. Bessie Coleman moves to the big city of Chicago where those that meet her observe signs of a woman destined for greatness. When Bessie decides that she wants to fly an airplane, she could not get flight lessons anywhere in the United States. No flight school would take a black student during that time. But, schools in France would. With the help of wealthy donors, Bessie Coleman takes up studying French and leaves the country to receive flight lessons. A fatal air accident happens while she is in flight school. She decides to stay and complete her training – earning her an international pilot’s license. Bessie Coleman becomes the first black person to receive a pilot’s license in the United States. The press eats it up. The fact that she is regal and stunningly beautiful is not lost on her throngs of admirers.

Reporters flock behind the incredibly dressed Bessie at airshows. She repeatedly tells them her dream of building a flight school so that [everyone] could learn how to fly. She also angers some by refusing to perform at events that did not permit African Americans. Coleman gets her way because she is a star whose skills as a barnstormer are unmatched. She out dazzles even the best stunt pilots of her day. She walks on the wings of planes and makes her airplane do tricks that only a few would dare. Many barnstormers died at airshows during the early times in aviation. Queen Bess, as she is sometimes called, consistently compels thousands to come see her defy death.

Triumph turns to tragedy, however. One day before an airshow she was to headline, Brave Bessie falls 2000 feet from her airplane. She dies instantly. Her not so trusted assistant also dies a bizarre death immediately thereafter when the plane crashes to the ground. What about her dreams? The Red Tails, aka The Tuskegee Airmen, were trained at Bessie Coleman inspired flight schools that sprung up immediately after her death. This screenplay is based on a graduate study and short documentary film of the same name.

Posted by http://scholarresourcetutoring.blogspot.com/2015/07/book-store-specials.html at 9:30 AM