This is the draft resolution honoring aviatrix pioneer Bessie Coleman.  It will be presented at the next big city council meeting. The public is welcome and encouraged to come and witness history in the making.

THIS IS A DRAFT

WHEREAS, Bessie Coleman was born January 26, 1892 in Atlanta, Texas and raised in Waxahachie, Texas where she was the tenth of 13 children and attended a one-room segregated schoolhouse and became the family’s bookkeeper at a very young age for her mother’s cooking and housekeeping business; and

WHEREAS, Bessie Coleman at 18 years old attended college at the Colored Agricultural and Normal University in Langston, Oklahoma for several months before she ran out of money and headed back home to Waxahachie in grand style with members of the marching band in tow; and she moved to Chicago several years later during the mass migration from the south during World War I where she worked and became known as the fastest manicurist in the city while dreaming of learning to fly and becoming a pilot in the new world of aeronautics; and

WHEREAS, in 1920 Bessie Coleman, having learned French and using money that she had saved, and receiving an investment from an African-American banker, went to France where gender and racial prejudice was much less pronounced, and completed an aviation course, becoming the first American to receive a pilot’s license from the Federation Aeronautique Internationale and thereby became the first licensed black pilot in the United States upon her return to America; and

WHEREAS, Bessie Coleman performed in air shows around the country where she became known as “Queen Bess” and “Brave Bessie” as a result of her breath-taking air maneuvers and highly entertaining parachute jumps, and the Norman Studios in Jacksonville communicated with Bessie about using her flying skills to make what will later become The Flying Ace, and Queen Bess gave lectures inspiring others to pursue their dreams all while saving up money to make her dream of opening a flight school come true so that African Americans could learn how to fly here in the United States; and

WHEREAS, in 1926 on April 30th while on a barnstorming tour in Florida, Brave Bessie fell from her plane in Jacksonville at the now defunct Paxon Airfield where Bessie Coleman was killed, and thousands of mourners filed pass her coffin here at the St. Philips Episcopal Church and Bethel Baptist Institutional Church; now therefore

BE IT RESOLVED by the Council of the City of :
Section 1.      The City of Jacksonville hereby honors and commemorates a legacy of pioneering aviation, self-confidence and heroism of famed African-American female aviatrix Bessie Coleman, and urges all people to profit from her example of persistence and self-determination to follow her dreams and achieve unprecedented success despite long odds and discouraging circumstances.
Section 2.      Effective Date.  This Resolution shall become effective upon signature by the Mayor or upon becoming effective without the Mayor's signature. 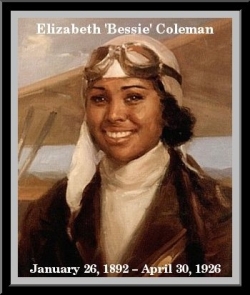 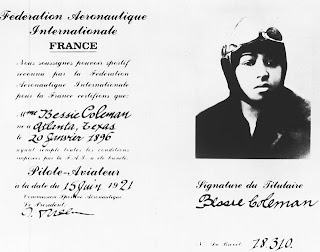 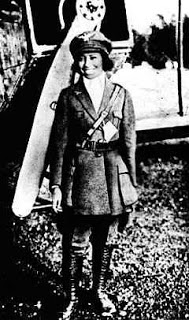 Posted by http://scholarresourcetutoring.blogspot.com/2015/07/book-store-specials.html at 6:25 AM