In 2013, one day before the 87th anniversary of the death of Bessie Coleman here in Jacksonville, Jacksonville.com (The Florida Times Union) posts an historical article about Bessie Coleman. This publication slighted her in 1926 arguably because she was a black woman. 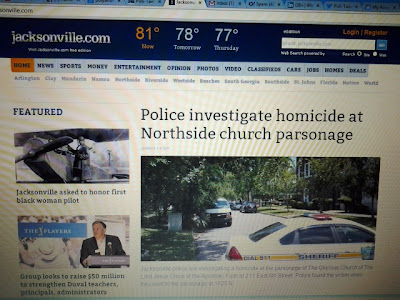 Congrats to Bessie Coleman on a front page honor in Jacksonville's Florida Times Union newspaper. A paper that slighted her in 1926 when she died (April 30), finally corrected the record - on the 87th anniversary of her death in that city. www.Poli-Tainment.com


It was big news in Jacksonville, briefly, 87 years ago.

On April 30, 1926, the lead headline of the afternoon edition of the Jacksonville Journal was played big: “Jax Airplane Crash Kills Two.” The headline in the next morning’s Times-Union was smaller but flashier: “Death at controls of airplane as two are flung from the sky.”

The stories recounted how aviatrix Bessie Coleman — the first black woman to get a pilot’s license — fell 2,000 feet to her death from an out-of-control plane piloted by William Wills, who was killed as the plane exploded on impact.

Thousands of people attended a memorial service in Jacksonville for Coleman, a celebrity pilot known for her daring, her perseverance and her beauty. Then the city moved on. Now there’s scant evidence in the city where she plunged to her death that she was ever there.

Jacksonville native Opio Sokoni is pushing to change that. He thinks there should be something named for her in Jacksonville — afterall, a main road at O’Hare International Airport in Chicago is named Bessie Coleman Drive.

“Here, I found out, no streets, no schools, no libraries, no parks. No nothing,” Sokoni said.
He found some support when he asked the City Council last week to do something to memorialize Coleman.

Councilman Warren Jones, whose district takes in the area where she died, said he’ll introduce a resolution honoring her. In an interview after the council meeting, he said he will also look into renaming a street or a park after Coleman, though that isn’t always an easy thing.

“He brought up a good point,” Jones said of Sokoni. “I’m just trying to determine how best to do it.”
Councilman Bill Gulliford said he’d support doing something more than a resolution.

“I think that for a woman, and especially as an African-American woman, in that time, to accomplish what she did was pretty doggone impressive,” he said.

There is one reminder of Coleman in Jacksonville already.

In January 2012, a bronze plaque of “Queen Bess,” as she was known, was placed next to the front doors of Paxon School for Advanced Studies, which in the 1920s was the site of the airfield where Coleman’s fatal flight began. It was unveiled by members of the Bessie Coleman Aerospace Legacy Inc., founded by a group of African-American female pilots.

That group sponsors an essay contest for Paxon students, and students see the plaque every day, said the school’s principal, Royce Turner. “She is kept alive in that way,” he said.

The school has another aeronautical connection: The road in front of it has already been renamed for Paxon grad Norman E. Thagard, a one-time astronaut. “And we’re the Eagles, and that gives us another connection to flying,” Turner said.

Marisa Carbone of Atlantic Beach researched Coleman’s life for a screenplay that was featured at a script contest at the Jacksonville Film Festival in 2004.

“You know, there should be a statue here, there really should,” Carbone said. “She was a pioneer here. She was before Amelia Earhart.”

Coleman, the daughter of Texas sharecroppers, was intrepid: When schools in America wouldn’t teach her to fly, she went to language school to learn French, then traveled to France to get her pilot’s license in 1921.

She was pretty and engaging and brave, which made her a favorite of the Chicago Defender newspaper, a black publication that frequently put her on the front page. Railroad porters put copies of the paper on trains, which then took it around the country, where word of the barnstorming pilot spread, Carbone said.

Coleman put on flying displays around the country, and came to Jacksonville in 1926 to prepare for a big show on May 1. The day before, she and Willis took off to scout out where she would make a parachute jump the next day.

In flight over the Westside, the plane, a Curtiss JN-4, went into a sudden dive and Coleman, who was peering over the side, fell to the ground. Wills died moments later in the crash landing. News reports at the time said a wrench had slid and jammed into the “control gears” of the plane.
“They had a huge service for her at Bethel [Baptist Institutional Church],” Carbone said, “and then they put her body on a train, and all across the country the train stopped and there were services along the way, and when it got to Chicago there was an even bigger service.”

Books have been written about Coleman, and she was honored with a postal service stamp. Mae Jemison, the first black women to fly in space, called Coleman an inspiration. On the anniversary of her death, pilots in Chicago do a flyover past her grave.

A resolution in Jacksonville would be nice, Sokoni said, but it’s not enough.

He’s 43, a Navy vet and graduate of Howard University law school. His family goes back generations in Cosmo, a little community in Fort Caroline. After law school he went west and ran a small radio station in Portland, Ore., and had a few stints on TV facing off against Fox News hosts such as Michelle Malkin, Bill O’Reilly and Laura Ingraham. Back in Jacksonville, he now heads a nonprofit called Poli-tainment Inc., which mixes entertainment and social issues.

That’s where he learned of Coleman’s story, which he made into a short film, “Bessie Coleman: Flying the Blues,” that’s now on YouTube. “Bessie Coleman was one of a kind,” he said. “People need to know about her.”

And the city where she died, he figures, needs to do something more to keep her story alive.
“I don’t want this to be just a black thing,” Sokoni said. “The entire city needs to understand that this woman belongs to all of us.”

Jacksonville, Florida City Council members Gulliford and Jones were the first to speak up in support of honoring aviatrix pioneer Bessie Coleman in a major way in the city.

Posted by http://scholarresourcetutoring.blogspot.com/2015/07/book-store-specials.html at 7:33 PM